We are pleased to announce the winner of the Spring Contest is Charles Kelly!  Charles received a bright green Apple Ipod Shuffle and a $15 gift card for Itunes.  Congratulations! and Thank you to everyone who participated.  Check out what's happening this month at Dublin Family Chiropractic and stay in touch for more contests! 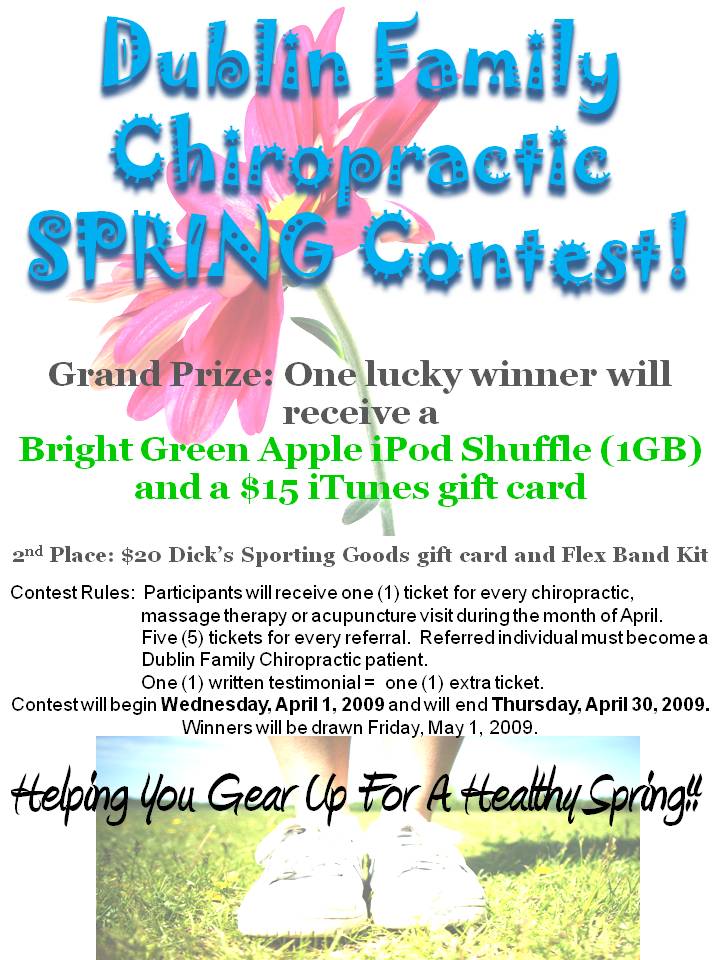 A message from Molly Redman, LMT

Molly, Licensed Massage Therapist for Dublin Family Chiropractic,  would like to remind everyone that if your insurance plan offers a "Flexible Spending Account" or FSA, you can use that money towards massage therapy.
An FSA allows an employee to set aside a portion of his or her earnings to pay for qualified expenses, most commonly for medical expenses but often for dependent care or other expenses. Money deducted from an employee's pay into an FSA is not subject to payroll taxes, resulting in a substantial payroll tax savings.  An FSA may be utilized by paper claims or an FSA debit card, also known as a Flexcard.

And since many of the FSA's utilize the principal or "use it or lose it", whatever money is left in the account at the end of the coverage period is usually forfeited back to the company.  So why not treat yourself to a massage, put that money toward your chiropractic deductible and co-pay, and call today to schedule with Dublin Family Chiropractic!

Learn how chiropractic care during and after pregnancy
can relieve lower back pain and help align the pelvis.

Lower back pain is a typical complaint during pregnancy but Dr. Jamie L. Berringer, a Dublin, Ohio chiropractor, has been helping pregnant women to relieve lower back pain and is getting excellent results without the use of drugs.

According to Dr. Berringer, "Many physicians are starting to welcome alternative forms of healthcare, but the majority are still telling pregnant patients there will be a lot of discomfort during pregnancy and women are going to have to accept this as trade-off for the miracle of life.�  But women do not have to deal with lower back pain while their bodies change; now they can do something to prevent it.  Chiropractic care is safe and effective at treating lower back pain, and as a bonus, can sometimes lead to a quicker and less painful labor.

A study in the Journal of Manipulative and Physiological Therapeutics in 1991 revealed that 84% of patients who received spinal manipulative therapy (chiropractic adjustments) reported a decrease in back pain while pregnant. A study conducted by Irvin Henderson MD, a trustee of the American Medical Association, concluded that pregnant women who received chiropractic care during their 3rd trimester were able to carry and deliver with more comfort.  Studies conducted by orthopedic researcher Per Freitag MD showed that analgesics during delivery was reduced by half in pregnant patients under regular Chiropractic care.  Chiropractic researcher Dr. Joan Fallon conducted studies that showed a 24% reduction in average labor time for first-time mothers who received chiropractic care, and 39% reduction for women who were delivering for the second or third time.

Lower back pain has been such a prevalent symptom during pregnancy for the following reasons: weight gain adds stress to the lower back, the center of gravity changes during pregnancy which causes increased muscle tension and fatigue, and hormonal releases which cause joint laxity and decreased joint support.  But with the aid of chiropractic care, regular adjustments to realign the joints of the spine and pelvis as well as stretches and strengthening exercises, the discomfort can be reduced and relieved.

Dr. Berringer recommends chiropractic care for women at all stages of their life.  Whether trying to conceive, during pregnancy, or post-partum, the pelvis and nerves that supply the reproductive organs need to be stress-free and functioning as best they can.  She recommends other things that can be done to reduce strain on the back such as sleeping on your side, maintaining good posture, eating and exercising properly, using a pregnancy pillow or support belt, and many more.

Dr. Jamie and her assistant, Courtney, were proud to be a part of  the Grand Opening of the new National City Bank in Dublin!  Saturday's weather was perfect for a day of outdoor activities from music and dancing, to face painting and balloon animals.  The Washington Township Fire Department made an appearance as well as some other local businesses.  And Dublin Family Chiropractic had a massage chair available!  We look forward to seeing some of our new friends around the office.

forwarded from The Baby Bonanza

Thank You to BPW

I want to Thank the women of BPW for allowing me and my colleague, Kit Lockett, to perform massage and polarity work at the annual BPW Ohio State Conference.  We had a great time and were more than pleased with the opportunity to present on both Friday and Saturday.

The topic of the presentation was "Stress...Change your perspective, change your life" and Kit did a great job of talking about how "Thought" can have a huge impact on our health.  Dr. Jamie followed up on Saturday talking about how to perform some low impact exercises and stretches to relieve stress in the neck and shoulders and the low back/buttocks area.  The "Wall Angel" exercises were a great hit and we hope that everyone will continue to perform them in their daily lives.  If you have any questions about these exercises, please feel free to contact Dublin Family Chiropractic and we will be happy to get some pictures of the exercises mailed, emailed or faxed to you.

Thanks again for a wonderful experience this weekend.  The organization of Business and Professional Women should be celebrated for all that it does to promote female-owned or operated businesses!

The organization called BPW (Business and Professional Women) will be holding their annual Ohio state conference in Dublin at the Columbus Marriot Northwest (Blazer Parkway) on May 16 - 17, 2008.  The title of this year's conference is "Heart & Soul" and a lot of the sponsorship is geared towards the American Heart Association.  Dr. Jamie will be participating in this conference to educate and network with young professional women in the area.  If you will be attending the BPW Conference please stop by the Dublin Family Chiropractic booth and enjoy a relaxing chair massage by Dr. Jamie or one of her massage assistants!

To those of you who are looking for Natural Healing and Beauty products and accessories, please click on the link to Let Your Jewelry Design You and you'll be able to have an experienced creative jeweler design a piece of jewelry for you...some of which promote health.  For instance, "Hematite is a naturally magnetic stone. This stone is believed to help with arthritis."

These necklaces and bracelets are very reasonably priced and can be custom designed to your needs.
CHECK IT OUT!

Congratulations to Laura Pack of Columbus for winning the Body Support System!  Laura will enjoy being able to lie face down and relieve some of low back tension with this pillow.  It's great during the pregnancy stage, but can also be converted into a small pillow to cradle a newborn.  Who couldn't use one more hand while dealing with a newborn?!?